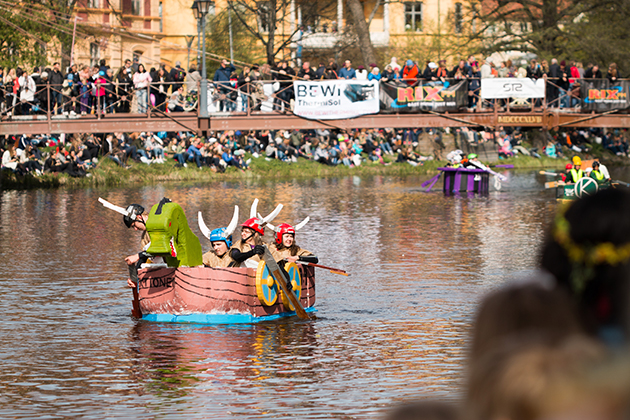 The city of Uppsala and the county of Uppland

Uppsala is a large and lively centre in terms of education, research and student life. However, although being the 4th largest city of Sweden, Uppsala is from an international point of view a small, calm and safe place. This charming old town is easily accessible by northbound train or bus from Stockholm (1 hour) and Arlanda international airport (30 minutes). Uppsala is located within the county of Uppland in a historically rich landscape, which a millennium ago was one of the most prominent centres of the Viking culture.

Beside the castle and the dome the older university buildings, many of them highly interesting and beautiful, dominate the city centre around the small river Fyrisån. Most impressive are the university house and the university library, Carolina Rediviva. The character of Uppsala is to a large extent dependent on the presence of the two universities (Uppsala University in the city centre and the Swedish University of Agricultural Sciences just south of the city). The students are a dominating and important part of the society, giving the population a youthful and modern impression.

The long university tradition and strong research in Uppsala guarantees a high quality education as well as an exciting student life. In contrast to most European cities the students of Uppsala have made the bicycle the most important mode of city transportation. Most facilities and necessities for sports and recreation found in a larger city are present in Uppsala, and more or less everything is easily reachable by bicycle on safe roads. If you want a wider range of opportunities, the considerably bigger and busier Stockholm is only an hour away by train.

In the central part of the city are the thirteen students “Nations” located. These are student clubs dating back to the 17th century, offering many kinds of social and recreational activities, from newspaper and reading room, library, bar, restaurant, discotheque, to yearly large festivities (“gasques”). Each Nation is connected to and bears the name of a certain region in Sweden. It is not compulsory to be a member of a nation, but it is recommended. Most students join the nation representing the region they are native from. As a foreign student you are free to choose which nation you want to join.

Student dorms and apartments are spread over the city and its vicinity. The living is mainly based on corridors with a number of rooms sharing the same kitchen, and with male and female students in the same corridor. The monthly rent is approx. EUR 300, somewhat depending on the standard. As a foreign student you will have good opportunities to meet with Swedish and foreign students in the corridors.

Read more about student life in Uppsala and choose which nation you want to belong to at:
www.kuratorskonventet.se
www.uppsalastudent.com

There are several unions for Uppsala University students collaborating with each other. The union for students at the faculty of science and technology in Uppsala is UTN, Uppsala Union of Engineering and Science Students. UTN takes care of educational issues, student welfare, international and labour market issues. UTN also organises social activities. For more information see www.utn.se/en. Membership in UTN is free of charge.

The Uppsala Student Union is an organisation for student groups without an own specific union. The activities of the Student Union can be divided into two types: the day-to-day services and the long-term political matters concerning students. The day-to-day services include access to computers, telephones, second-hand book sale, counselling for international students, housing information and much more. For more information see www.uppsalastudentkar.se/international-students.

The biology student association BÄR (Biologiska ÄmnesRådet) arranges parties, monitor the courses given in biology programmes at both bachelor and master level, and more. If you want to get in touch with BÄR, if you have questions or want to get more involved in your studies, you can email nvb-ordf@utn.uu.se. To receive information from BÄR, please join the facebook group. BÄR is located at EBC, ground floor Norbyvägen 18B, near the lunchroom.

All students in the Molecular biotechnology engineering programme are welcome to X-sektionen, your student association. X-sektionen can help you with everything related to your studies, be it problems in the lecture halls, party activity, or gender issues. E-mail x-ordf@utn.se.

The International Buddy Programme is a cooperative programme from Uppsala Student Union, ELSA (The European Law Students’ Association), UTN (Uppsala Union of Engineering and Science Students) and Uppsala University. The main intention with this programme is to make sure that all new international students receive help and feedback by students at Uppsala University, both before, during and after they have settled in Uppsala. www.uppsalastudentkar.se/buddy-program.