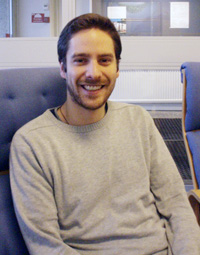 The main reason why Michael Stocks ended up in Sweden and Uppsala was because of a girl. Michael met a Swedish girl, Frida, back home in England and when she moved back to Sweden he decided to move with her. With an undergraduate in biology from Salford University outside Manchester there was no problem applying for the International Masters Programme in Biology at Uppsala University.

The reason he chose Uppsala University out of several universities in Sweden was partly because the good reputation the university has internationally but mostly because there is no need to know Swedish when applying. All studies are in English. On the other hand, Michael has in his one and a half years in Sweden learnt Swedish so well he now understands and talks it fluently.

- Having a Swedish girlfriend helps a lot of course, he says with a smile. And I also wanted to apply for some jobs in Sweden when I arrived and then Swedish is often compulsory.

Michael has been studying in Uppsala since autumn 2007 but has not really lived in the city until August 2008. The first year he commuted between Uppsala and Borlänge where his girlfriend Frida lives and studies.

- Uppsala is a beautiful city and it is just recently, during this term it has felt as my home.

And it is nice not to commute every single day. Now Michael lives in one of the long corridors in Flogsta and enjoys it well, although he visits Borlänge as often as he can.

Michael is born and raised close to Oxford in England and likes the fact that Uppsala reminds him of his hometown. Uppsala is, just as Oxford, an old town with beautiful houses and a lot of student traditions. The distance to England is not that far either and Michael tries to go home at least once per term. Last time was during the Christmas holidays.

- Skype makes it easier being away from friends and family, he says, it doesn’t feel too far away when you can talk and see them back home whenever you want to. But the weather could be a bit different. He is not very fond of the cold weather central Sweden offers during wintertime, but the snow is great though.

At the moment Michael is finishing his Master of Science by writing his masters thesis in population genetics at the Department of functional genomics at Evolutionary Biology Centre (EBC). He’s currently working on the speciation of four spruce species from the Qinghai-Tibetan Plateau in China, using a variety of population genetics, Bayesian and similar methods to try to reconstruct past demographic events.

- It is when doing a masters thesis like this you really learn the subject and methods, he says. Uppsala has a high educational standard over all but after this I really think that I can use my knowledge in my major, he continues.

When graduated Michael is thinking of continuing in the academic circles and getting a PhD.

- Maybe I’ll apply for one here in Uppsala he ponders. I really like Uppsala and would absolutely recommend it to other master students, he finishes.