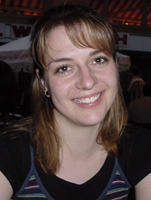 She enjoys studying at the Master programme in Biology and is impressed by the way courses are evaluated here and thinks Swedes are very tolerant towards foreigners.

Franziska Pietsch was born in Bernan just outside Berlin in Germany. She started her Biology studies at Osnabrück University wanting to deepen her knowledge in Evolution and Ecology but ended up with a Bachelors degree in Cell Biology. The last term of her Bachelor studies she went to England for an Erasmus exchange. Before choosing Sweden for her Master studies Franziska had visited Sweden several times for holidays with her family.

- I really liked it and I knew that University education in Sweden is very good; that is well known in Germany. Uppsala University is very famous and many professors in Uppsala are also well known at my home university.

Satisfied with the studies

Franziska came to Uppsala this summer and is now studying her second course at the Master programme in Biology. She thinks it’s hard to see the differences in the level of the education comparing the courses here with courses back in Germany but thinks there are almost the same standard levels in the two countries. However she already has seen some small distinctions in this education compared to the one in Germany:

- Here you only take one course at a time and also there are a lot more course evaluations and similar stuff here, having course representatives for each course is one example. I believe it’s excellent for the students to have such an influence on their own education.

She also thinks it’s a much more personal atmosphere here among students and all the teachers.

- Saying “you” to everyone feels strange, you never do that at Osnabrück University.

Like many other international students Franziska lives in Flogsta, an area on the outskirts of Uppsala.

- My corridor mates are very nice. It used to be three Swedes but now it’s only two left. Apart from those two all are from varying countries, which I appreciate a lot.

Franziska says that she spends most of her time together with other internationals as it’s easier to get into contact with them.

- Swedes are quite similar to German people, it’s easy to get in contact with them but it might be harder to get close to them. But Swedes here in Uppsala seem very tolerant towards foreigners and don’t treat anyone bad although the whole town is full of non-Swedish speaking people.

Even if Franziska only has lived in Uppsala since half a year she already has tried a lot on her spare-time. She has been working at Värmlands nation, joined a choir and tested the "gympa"-thing as she refers to it –the typical Swedish workout. Recently she also applied for clarinet lessons and got elected as the representative for international biology students in BÄR, the Biology student association.

After finishing her master studies she doesn’t want to go back to Germany, she rather wants to stay somewhere in Scandinavia. While she’s in Sweden she wants to learn Swedish even though she points out that it’s easy to get around only using English.

- I really want to learn the language but somehow I keep talking English with my Swedish friends. My ambition is to be able to at least understand a bit Swedish!