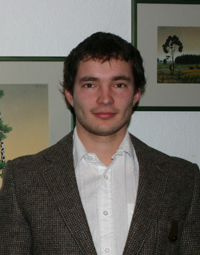 Born in St. Petersburg and raised in a small village in south of Estonia Andrei Baikov, 24, is already familiar with the fact of being somewhat international. When finishing up his studies at Tartu University in a double major undergraduate in biology and gene technology he wanted to do his post graduation, Master of Science, abroad. After a lot of consideration and comparisons between several European universities Uppsala University was the one he chose.

– I wanted to do my Master of Science in Biotechnology but adding Business to it he says. Uppsala University is one of the few universities that offer a biotech. master including some business courses, and I haven’t been disappointed. Uppsala is great he continues.

According to Andrei the biotechnology courses at Uppsala University are of high standard and especially enjoyed one of his courses called Protein engineering.

- It was a very challenging but interesting course and the class also had coffee together with the course supervisors every day during labs, he says and smiles. It is such a friendly study environment here in Sweden he continues. Not only among students but teachers always have time to help you, even outside class hours if needed.

Compared to many other countries Uppsala University offers more seminars, presentations and group tasks for students, just to improve the communication among students and teachers. Andrei also likes the idea to improve your learning by thinking yourself rather than just reading the course books.

Andrei feels very lucky to have made such a network of friends from pretty much every continent and is sure that is a mutual opinion among the other international students. In your spare time Uppsala has much to offer. 13 nations that exist only for the students, many clubs and pubs, lots of coffee shops to have a real Swedish “fika”, sporting facilities and much more. Whatever a student would like to do you can do in Uppsala.

When it comes to learning Swedish Andrei regrets that he did not make the effort when he started in Uppsala. He figures that he probably knows more than he thinks he does and understands it quite well but cannot talk or write it good enough.

- Although, it is not that hard to learn he says. I just have to take the time to do it. So far I’ve been doing so many other things here in Uppsala.

Andrei is about to finish his Master of Science by writing his masters thesis. He mostly would like the opportunity to do it at a biotechnology company in Uppsala where he can use both his biotechnology knowledge as much as the business.

- I like Uppsala very much and would like to continue working here after my graduation. At least for a couple of years, then I want to work somewhere else in the world before I probably should settle down back in Estonia he says. Get a family and so, you know, he continues with a laugh.